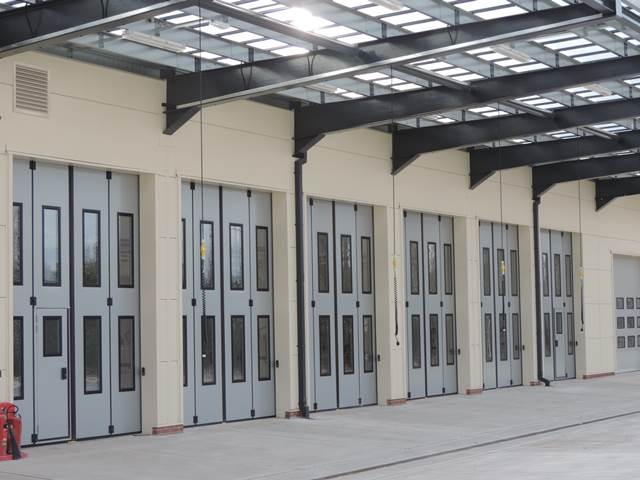 Jewers Doors put the finishing touches to the new £15 million Ambulance and Fire Services Resource Centre (AFSRC) at Wrexham with the installation of 14 pairs of Swift fast-acting, bi-fold doors. The new AFSR Centre accommodates eight fire appliance vehicles and six ambulances and replaces an obsolete fire station and two ambulance stations which are now co-located onto one modern, fast-response site.

Jewers Doors were commissioned to install doors where safety, reliability and speed of operation, were the prime factors. Each door comprises four panels, with two leaves folding to each side of the exit. Fire and ambulance vehicles need to exit rapidly when under ‘blue light’ emergency response conditions, and Swift doors take less than seven seconds to fully open automatically.  In the event of power failure, each door can be instantly and effortlessly opened manually via low-level disengage handles to prevent delays.
​
A four metre vertical roller door not only typically takes twice as long to open, but drivers find it more difficult to judge when there is sufficient height clearance.  In the urgency of responding to an emergency call, there is a risk of tall vehicles such as fire engines hitting the bottom of the door while it’s still opening, which not only requires a costly repair to the door, but more expensively to the vehicles ladders and roof lights.  As Swift doors open to the side, there is full height access at all times and drivers have full line of sight of the doors as they open, thus ensuring a safe exit.


Leading edges of the doors are fitted with full height pressure sensitive edges, so if doors were to meet resistance during closing, they would immediately stop and reverse, however, photocell beams inside and out create a safe area around the door to greatly reduce the risk of an impact ever occurring.


Gareth Davies, project manager for BAM Construction Ltd said, “Jewers have been supplying Swift doors for North Wales Fire since 2008. The doors installed at Wrexham underline their reputation and do justice to this new state-of-the-art emergency centre.”
Swift door panels are manufactured as a single piece construction, fully insulated with CFC-free foam materials to optimise thermal efficiency and reduce noise pollution by 25dB, and fitted with multi-wall rubber seals to all edges to reduce water, air and dust ingress as well as heat loss.