Jewers Doors have just completed the installation of forty six Swift fast acting, bi-fold doors for  nine new London Fire Brigade (LFB) stations under a £51.5 million Private Finance Initiative (PFI) project constructed by Blue3 consortium, comprising Kier and DIF Infrastructure.
"LFB have been specifying bi-folding doors to all new and refurbishment projects for over 25 years, and Jewers have been supplying a large proportion of those projects, so Swift doors were first choice for Kier on this 28 year PFI project.” commented Mark Jewers, Director of Jewers Doors.  “The Swift door opens fully in less than 7 seconds, making them ideal for fire stations where appliances need to exit rapidly under ‘blue light’ emergency response conditions. That’s less than half the time it takes for typical vertical lifting doors to open.”
​
Swift doors are designed with safety and security as standard.  Leading edges of the door are fitted with full height pressure sensitive edges, so if a door meets any resistance during closing, it immediately stops and reverses.  In addition, photocell beams inside and outside, create a safe area around the door which greatly reduces the risk of an impact ever occurring.  In the event of power failure, each door can be instantly and effortlessly opened by hand in around 2 seconds.

Jewers added, “The sideways opening action and the large vision panel within each door leaf provides the fire appliance driver full visibility of the door position and the street outside, to exit the bay safety at all times.  With vertical lifting doors, it is difficult to judge when there is sufficient height clearance, and in an emergency situation, it’s not unknown for the appliance to hit the bottom of the door before it’s fully open, resulting in downtime, costly repairs to the door and often the fire engine.”


The new fire stations at Mitcham, Old Kent Road, Plaistow, Orpington and Dagenham are now in full service and the remaining four stations at Leytonstone, Shadwell, Purley and Dockhead are due for completion in early 2016. 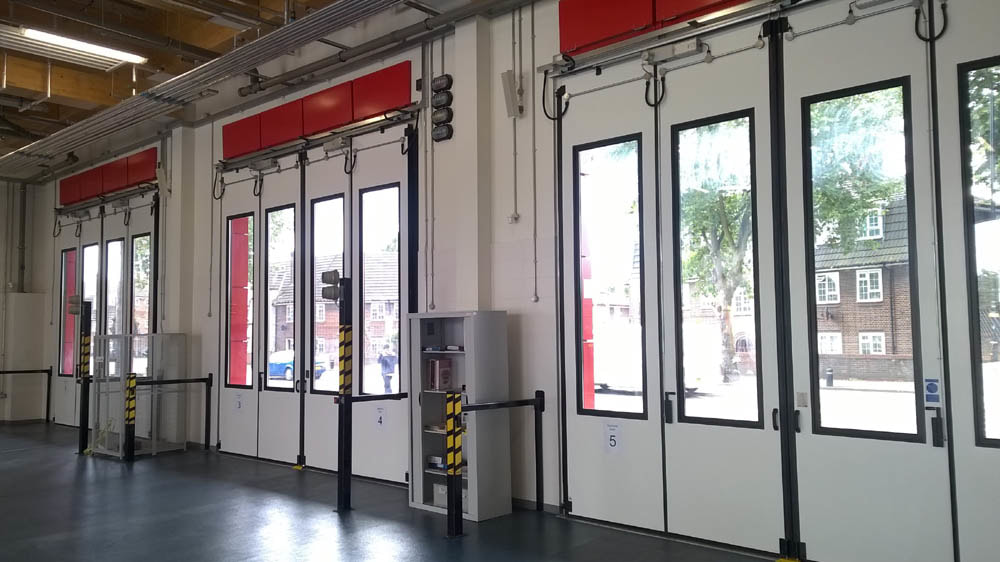